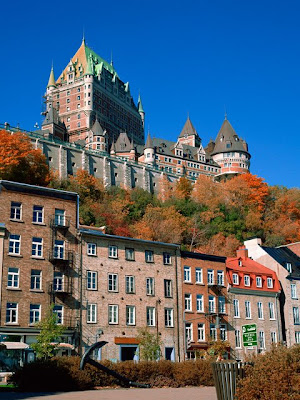 I'm very pleased to say that we are taking a little trip to Quebec city in a few weeks! Hopefully, by the time we arrive the city will look like this, with lots of beautiful fall foilage. I am so looking forward to wandering around this beautiful place, visiting museums, shopping, and eating lots of yummy food. I am a bit nervous about my horrible french skills, but I am sure we will muddle along. I can read most words (especially those related to food and drink!) but have trouble stringing them together to make sentences that others can understand. But, then again, this is all part of the fun. 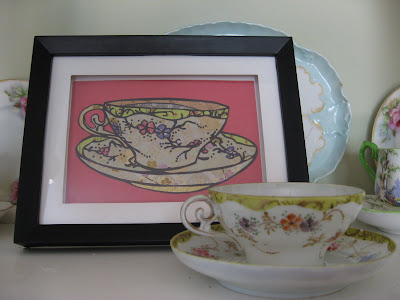 I think I've mentioned in the past my the collection of teacups my grandmother gave me, and how much I love them. I've been wanting to make some papercuts of the teacups for quite a little while, and I finally got a chance to do one. Here is a photo of my first teacup papercut, along with the original that inspired it. I'm hoping to do a few more over the next little bit and have a bit of a series of them, hence the title, Teacup No. 1.
Posted by trudi at 11:02 AM 5 comments: 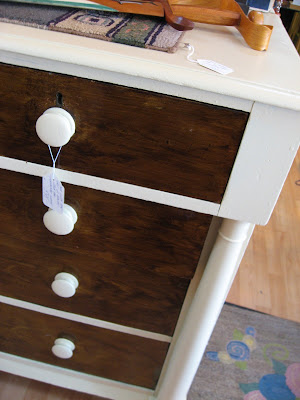 I was browsing through an antique shop a couple of weeks ago, and took a photo of this chest of drawers for a workmate who was looking for something similar. It wasn't exactly what she wanted - but I have decided that I love it, and want it for my very own.

A beautiful day in the neighborhood... 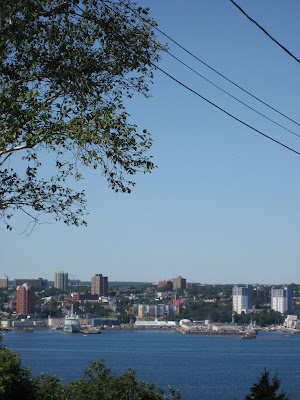 It's been beautiful here the last couple of days - literally not a cloud in the sky. We are coming in to fall - my favorite time of the year - so the mornings and evenings are crisp, but the days have been gloriously sunny. This is an image from my walk around the block with Milo - the city clear in the distance - if you look closely, you can even see Theodore the Tugboat.
Posted by trudi at 11:24 AM 2 comments: 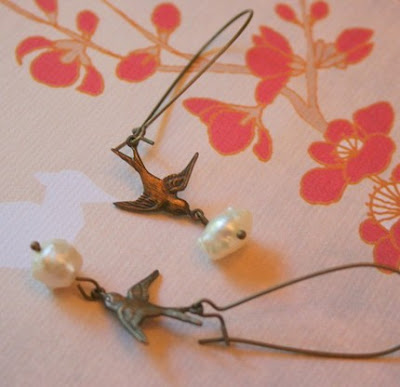 Rebecca of The Ardent Sparrow has featured me as an Etsy pick on her lovely blog! Thanks Rebecca! I am so glad she got in touch with me, because it also gave me a chance to discover her fantastic jewellery shop on Etsy, where she sells such lovely things as the "a day at the beach" earrings pictured above. All the pieces are made with beautiful stones, and have a vintage vibe. "The Ardent Sparrow" is definitely a shop to check out, and Rebecca's blog is great - and her Etsy series featuring Canadian crafters (like me!) is a wonderful resource.
Posted by trudi at 9:26 AM No comments: 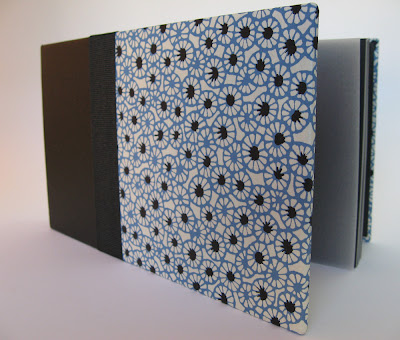 Another new album - finally got everything up in etsy. Phew! I just started using firefox - I'm wondering if that's the source of all my problems with uploading photos? Anyhow, this paper is relatively new, and I really dig it. Hope you do too. (:
Posted by trudi at 11:21 PM 2 comments: 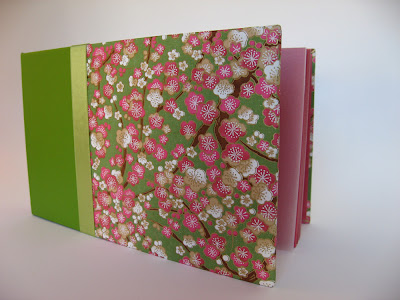 I spent the weekend completing some new photo albums - including this green/pink one - love this colour combo. I've been trying to upload them in my etsy shop, but having some technical difficulties. Maybe I'll get them in there tomorrow - it just feels good to have finished some work!

I popped out at lunch to do some errands, and decided to have a quick look at my local Home Outfitters store. To my surprise, they were in the midst of setting up a display of bed linens and accessories called Marie Claire Paris. I didn't have my camera, and I couldn't find any information online, but what I saw was beautiful! I hope to get back in a couple of days when they've finished putting everything out and see the whole line. How exciting!
Posted by trudi at 3:01 PM 1 comment: 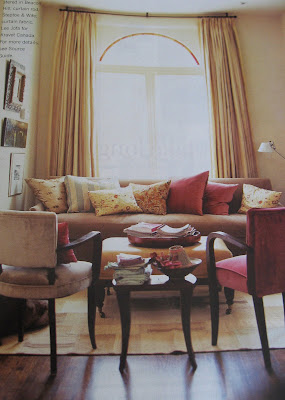 When we were buying our house, I went through a lot of interior magazines, thinking about how I wanted to decorate. There was one interior that I found really inspiring - my dream style - how I would love my house to look. It is the home of Canadian Home and County editor Erin McLaughlin, and all these images were taken from the October/November 2004 issue. 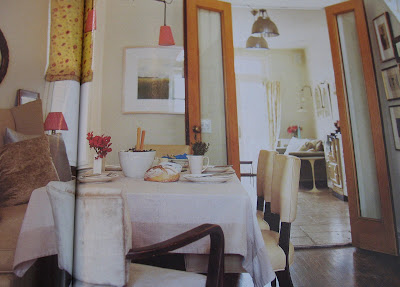 I hadn't looked at this spread for a long time, but I've been thinking lots about decorating, and dug it out to see if it still inspired me - it definitely does. I think what I like about it is the background colours are really soothing - but there are little pops of bright colour like fuschia and tiffany blue all over the place. I also love the use of old flea market pieces with a few modern bits thrown in. 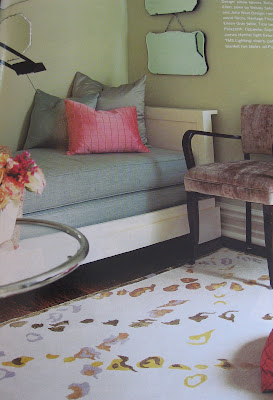 It's all just so homey and lived in, lovely really. I wonder if this house has changed much since 2004? If so, I'd love to see what's been done with the place. As for me, I still feel as though I haven't achieved my decorating dreams - we just keep getting busy, and life gets in the way. I guess though, that you never feel as though things are finished. I do know one thing though - I'm going to work some tiffany blue into my house somewhere.

A Work in Progress 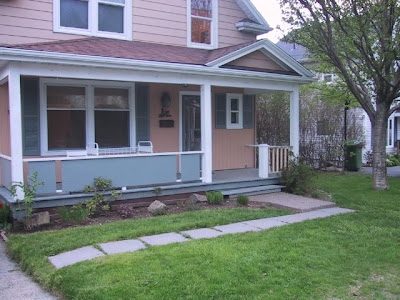 Our lives were turned a bit upside-down this week when we had a new roof installed. We had been planning this job for some time - everytime there was a storm, a few more old, brittle shingles would blow off the roof and I would lie in bed awake, waiting for the ceiling to fall in. Anyhow - we found someone to do the job, and they called on Friday, saying they were coming on Monday. My Nanna arrived on Sunday to mind Milo - he would have been frightened in the house alone while we were at work, listening to the workers pounding on the roof. A few days and a gazillion dollars later (well, not quite - but close) we have a new roof! The picture above is our house, when we first moved in.... 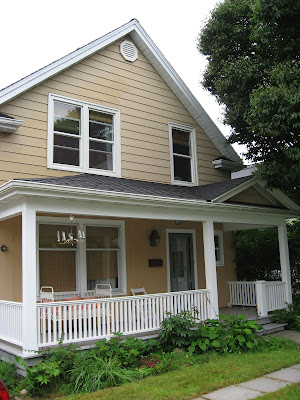 ...and this is how it looks now. Our house was built in the 1920s, and moved to this spot in the 1950s. The lady next door says she can remember our house coming up the street on a truck! Sometime in the '70s or '80s, the exterior was uglifed with aluminum siding, plastic shutters, plywood porch railing, and a colour scheme that can only be described as...odd. Salmon, poo brown and grey - what were they thinking?!!? Luckily, the inside remains pretty much untouched with lots of 1920s cottage charm - well, actually - not so lucky in terms of the bathroom and kitchen - but this will all change someday.

Anyhow, having the new roof really makes me want to change the color of the house. I am going back and forth between something classic and neutral, or a playful colourful palette that you might find in Lunenburg - a village on the coast where every house is painted a beautiful, bright colour. I've heard that fisherman in Nova Scotia just used to paint their houses with whatever paint was left over from painting their boats - lots of bold, bright hues. I just can't decide, so I'm putting it out there - any suggestions?
Posted by trudi at 8:21 AM 3 comments: 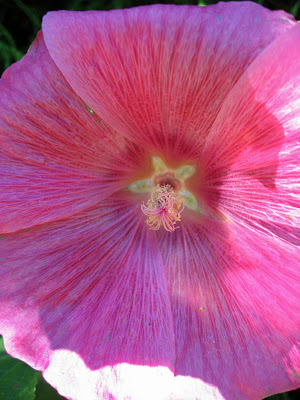 I've gone A.W.O.L. from my blog for the last little bit, but I'm back! I took a mini holiday - visiting my Nan, staying with a friend in the country and reading that time sucking book! But, now it's back to normal - lots of work to be done - preparing for Christmas, believe it or not....
Posted by trudi at 9:16 PM 3 comments:

other places you can find me...